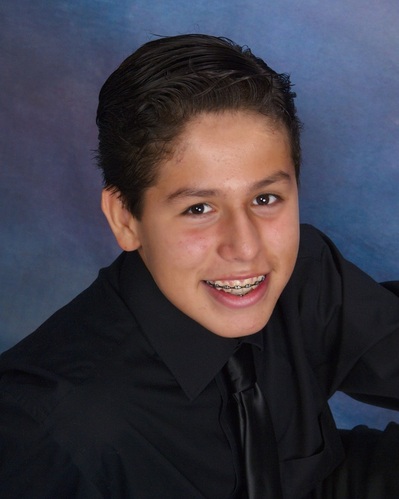 Darian Agredano
Darian is quite the extraordinary 13 year old.   He loves to entertain and capture the attention of an audience.  His favorite reactions are laughter and fear and he loves it when he can achieve both at the same time.  His favorite literature includes Shakespeare, classic novels, and horror thrillers.  When he is not reading or creating great poetry, he loves music, video games, and the great outdoors.

Mankind has always had a fear of deep water and what lives beneath.  Just imagine you are in the Tropics, relaxing in a natural spring leading off a river.  You are all alone. You can’t really touch the bottom, but that doesn't bother you.  It’s so peaceful.  You feel a nibble on your toe, but that doesn't bother you.  Your whole body is tingling, but you just shrug it off.  Ouch!  That hurt.  You pull your foot to your face and examine it.  There is a small circular bite mark.  Blood trickles from it.  You begin to feel uneasy.  “Ouch, ouch, ouch, damnit!”  More biting!  You begin to panic.  Your mind is telling you, “Get out!  Get out!”  You try to grasp the rock walls but the water and heat has made them moist and slippery, and you can’t seem to pull yourself out.  Ahh!  Something bit your toe badly.  You call for help, but there is no one around.  You had requested to take this hike to the springs alone.  You had argued with your wife and son.  The searing pain all around you is overwhelming.  It’s harder and harder to stay above the water.  You search for the rope ladder to climb out.  There it is, but you are in too much pain.  Fumbling with the rope, you get up three steps, but then lose your balance and fall back in.  You are sinking deeper and deeper.  The sun glistens through the water above you.  Almost completely numb, everything seems to be getting darker, and redder.  Becoming wrapped, consumed, enveloped by darkness.  A last thought crosses your mind, “didn't put on any sun block”.

It has been a while since we last spoke.  Not since I witnessed that terrible ordeal, but I understand that it’s not your fault and you didn't mean to kill that man, but a stab to the lung is almost always fatal.  I feel I may have dug the pit that you were most unceremoniously thrown into.  I hear you've spent the last few years in hiding, underground you might say.  And you had a very close call with a certain metal detector.  But hey, you are the biggest piece of evidence in a homicide case, which is still being investigated.  I haven't been doing well myself.  Bucket left me for a weed whacker, and I’ve been donated to charity.  The family that took me in has four children, and I was given to the three year old.  She drags me behind her and I’ve become scarred and dented, but life could be worse.  I hope your well and safe.

With love and affection,

The park is an interesting phenomenon in itself.  With a wide range of people, various plant life, and a strange assortment of small creatures.  It’s a hand full of ecosystems mushed together.  With trees lining the barriers, and giant clumps of iron and plastic, which bring children joy.  Small children playing tag, and middle-aged adults jogging, inertly wishing that they could join the children in there antics.  Wailing toddlers, screaming for candy to distract their parents while their friends sneak up from behind, and steal the entire box.  In a park, all reason and common sense is forgotten.  All the trees are climbable.  All the insects are edible.  All the fountains are swim-able. The parents huddle together, sobbing, realizing that they should have just gotten a dog.  A familiar song pierces the wall of noise, a familiar jingle associated with sugar.  There is dead silence as the jingle continues.  Then, there’s an explosion.  The race is on.  Dogs thrown, the elderly shoved to the ground all in an effort to get to the ice cream man’s truck first. The sugar rush has set in and the sticky children continue making more noise than ever, dropping their cones in the sand, and smearing the melted remains of their treats all over there faces.  But, the parents will soon be able to relax for as Newton’s Law says, “what comes up, must come down.” Hours and hours later heaps of unconscious children lay everywhere, slumped over the swings, hanging out of trash cans, and strewn about the tennis courts.  They are carried out by the truckload and loaded into strollers, or simply dragged by the ankles.  Then they are shoved into car seats, and driven home.  Other than a few gray hairs, the parents aren't worse for wear.  But there eye twitches knowing the process will be repeated tomorrow.

Twas the snowy night of Christmas
And all across the town
The sounds of giggling and laughter were to be found
Then, in a sudden manner of sorts
The sound of their merriment was cut short
Flaming wreckage spread across the street
The remains of a trolly being covered in sleet
And smack in the middle of this morbid scene
was a slightly singed sign reading
“Happy birthday Timmy, hope you enjoy your special holiday trolly ride”
The world is pretty messed up
What can I say?
But, I bet your glad you weren't on the trolly that day

Constant control!
As a small child, by your parents.
As a teen, by authority figures.
As an adult, by your boss.
Every stage of your life having to obey.
Very few moments bring the satisfaction of commanding.
I glance at the table.
A glint of metal catches my eye.
A polished ivory handle.
Iron framing.
The magnifying glass.
A tool children have been misusing since its creation.
“No!”  I tell myself, but the urge overcomes me.
I snatch it from the table and head outside.
I look over the object in my hand.
Solid.
Heavy.
Soon redemption will be mine.
A shadow crosses over the ant hill.
A shining laser rips from the heavens.
The poor inhabitants turned into black powder
as the suns rays spread havoc.
The end has arrived.